Burning Man is an annual week-long festival, dedicated to community, art, self-expression, and self-reliance, held at the end of August in Nevada’s Black Rock Desert. This summer, I had the pleasure to work with artist David Best on the construction of the Temple of Grace, envisioned as a spiritual and sacred space. 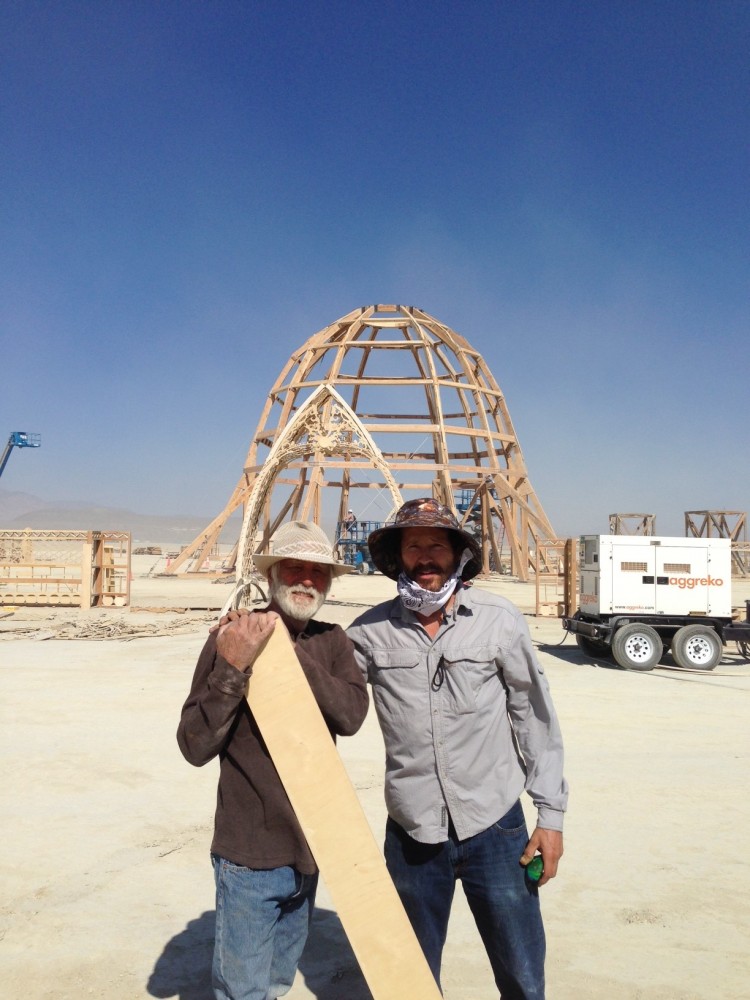 Here I am with David Best (left)

I arrived in Nevada’s Black Rock Desert on August 18th, one week before the gates opened at the 2014 Burning Man festival. I was part of a 100-person volunteer group that camped in various tents and trailers, several hundred yards from the construction site. We were there to build the Temple of Grace.

David Best had four architects involved in the project, along with close to 100 volunteers. Some of the materials were donated, and over 60% were recycled.

Initial construction began last June at an industrial lot in downtown Petaluma CA, before moving the framework to the desert. Artist David Best assigned me to head the crew in charge of gold leafing the domes, which would adorn the top of the temple’s steeple.

Life in the desert is harsh. We were warned to: “Take it easy the first day and drink more water than you think you’re thirsty for.” It’s very easy to become dehydrated and disoriented. The temperature can hit over 100° during the day, with winds whipping up to 70 miles an hour. At night, the temperature can drop to 40°. 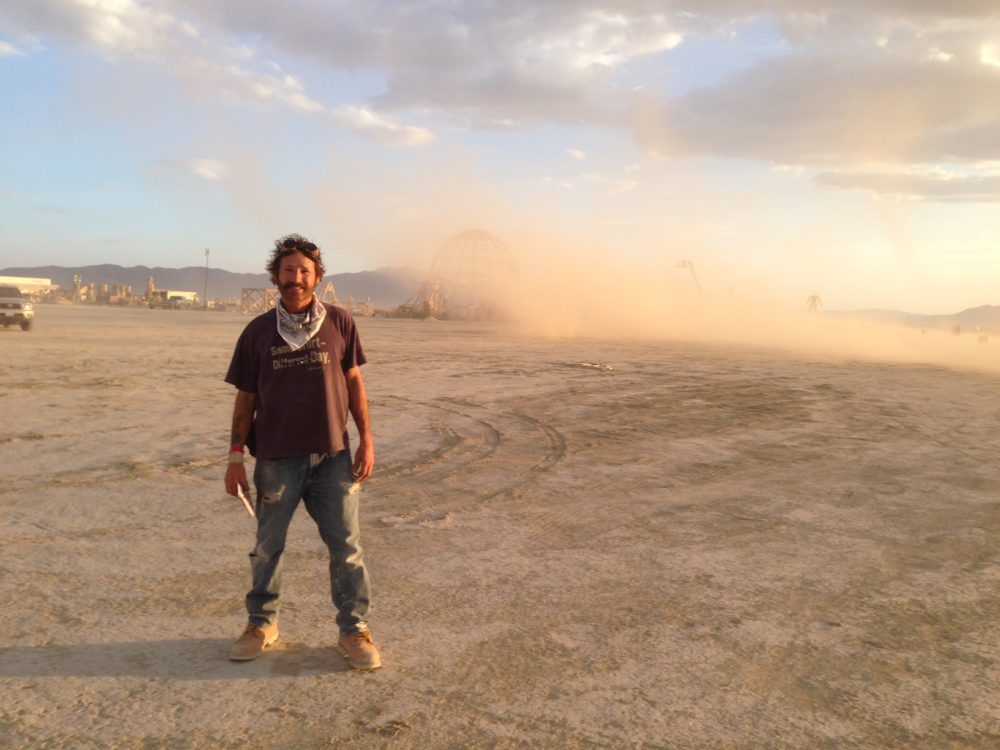 One of the guidelines for Burning Man is “radical self-reliance.” This means that you need to be able to take care of yourself. You were not allowed to pass through the gate, until your vehicle was searched to verify that you had brought food and the required minimum of 1 1/2 gallons of water per person per day.

I knew that I would need a shelter in which to work, amidst the desert winds and dust storms. David Best arranged to have one of the many delivery trucks leave a 40-foot trailer for my studio. It often made sense to work late into the night, because it was too hot to work inside of the trailer during the day. Also, the winds died down at night.

Here are some of my highlights: 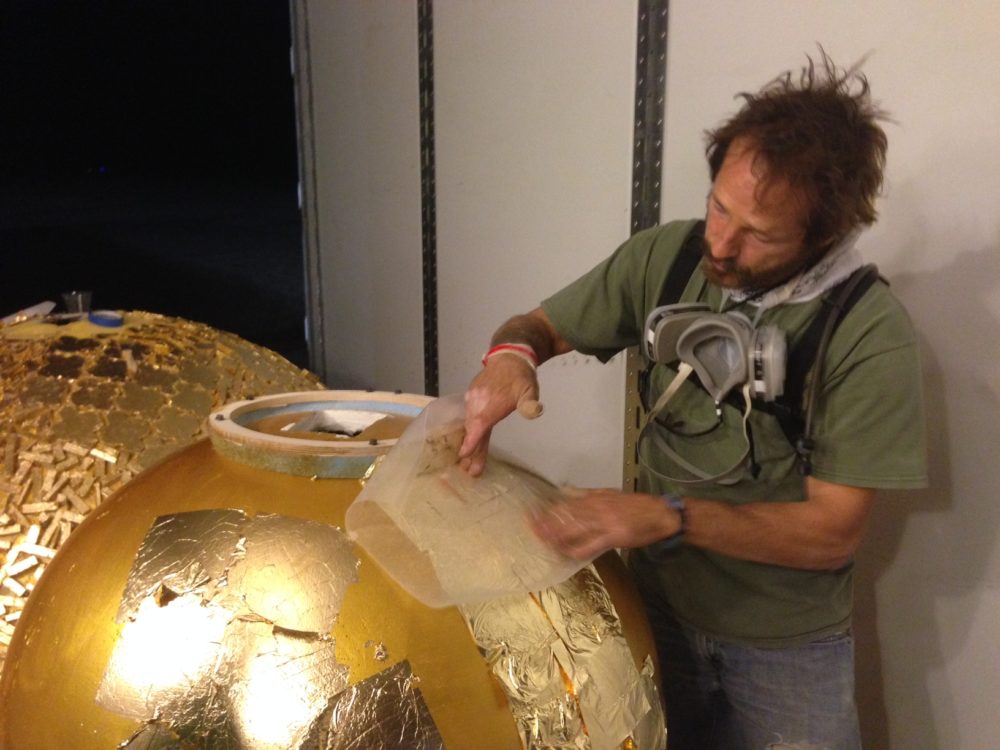 Here, I am gold leafing the domes. Wax paper, laid onto the leaves and rubbed, is a great way to ensure bonding, after gold leaf has been applied to the oil size. The size is a quick drying varnish, which dries to about the stickiness of masking tape and becomes the adhesive that bonds the metal to the base.

I’m using “composition” gold leaf. It is much more affordable than genuine 23 3/4 Karat gold, which usually is used for exterior domes intended to last.

There were approximately 14 people that helped to gold leaf the domes. Working together, we developed a great sense of community. 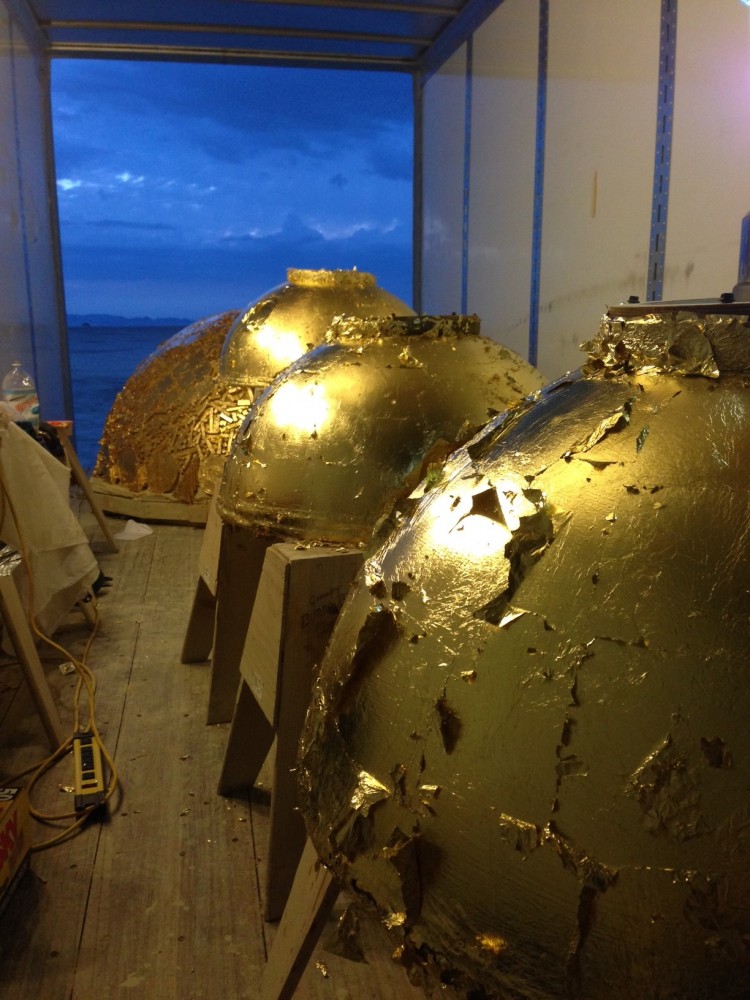 Sunrise after working all night

My daughter Sasha has been volunteering and working with the organizers of Burning Man’s First Camp Kitchen for a number of years and encouraged me, as an artist and musician, to experience this incredible event. We agreed to arrive one week early and drive in a caravan together. I rented my own RV and camped with the Temple crew, and Sasha camped with her friends from Vail. Sasha was a great help with the gold leafing, and it was heartwarming to have her there working with me. 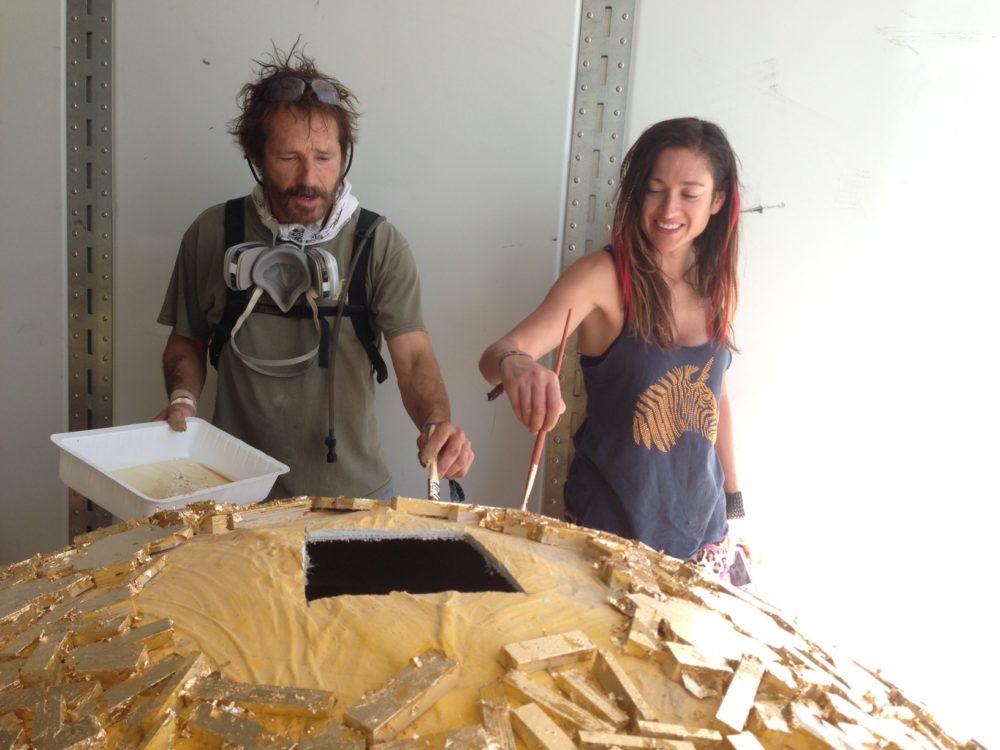 One of biggest challenges was installing the domes. Cranes were used to lift the domes 90-feet high for placement atop the steeple. 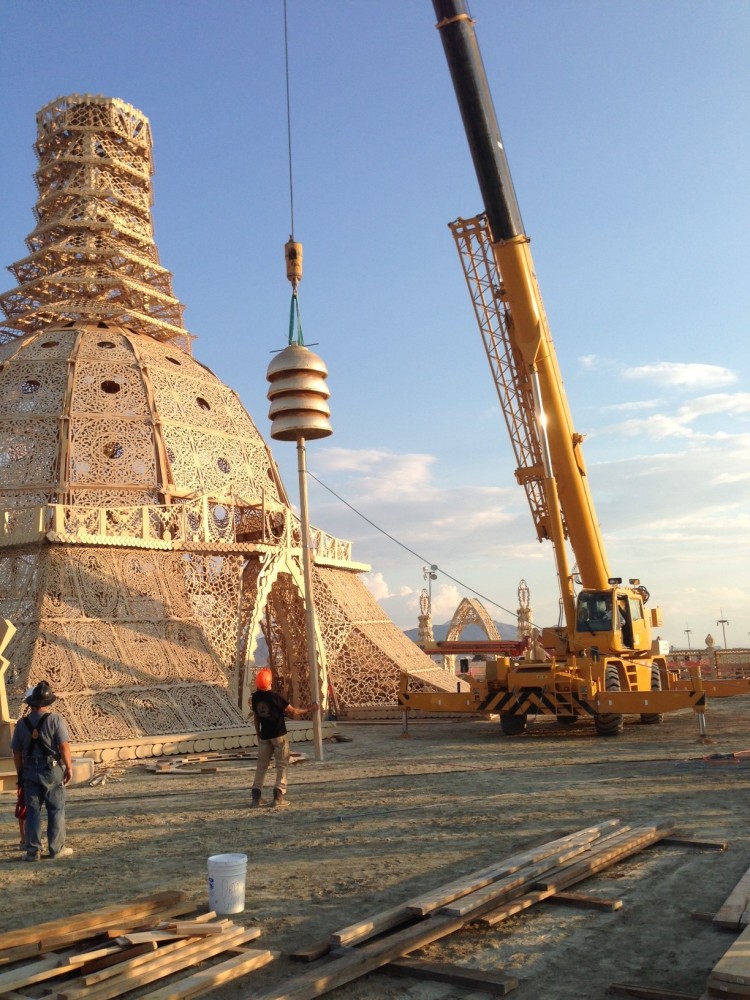 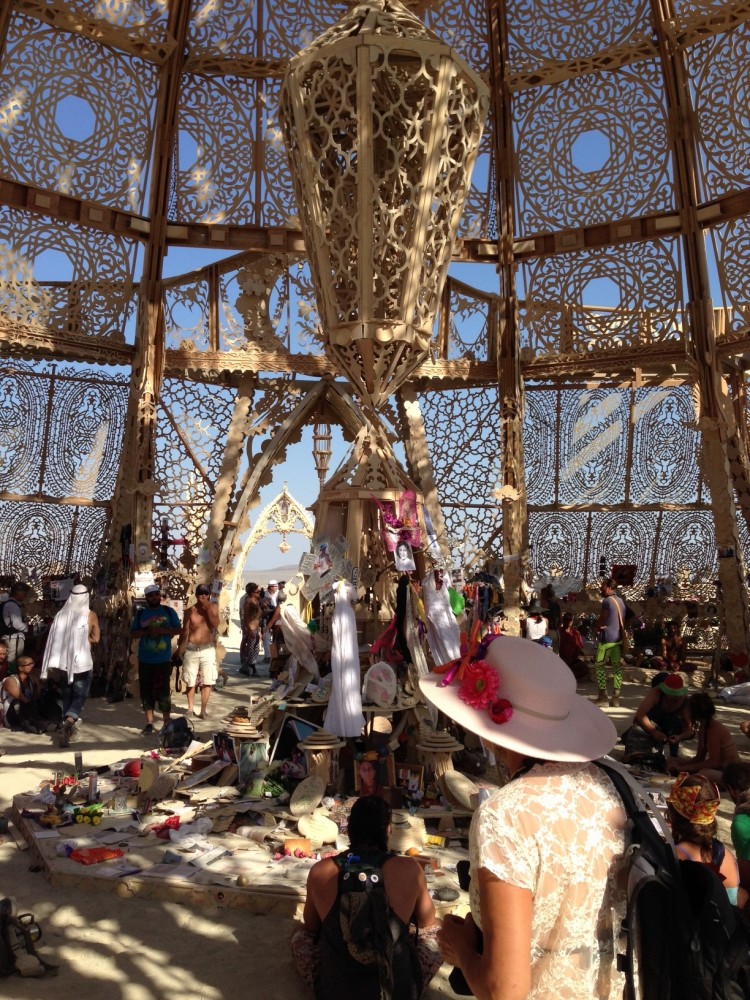 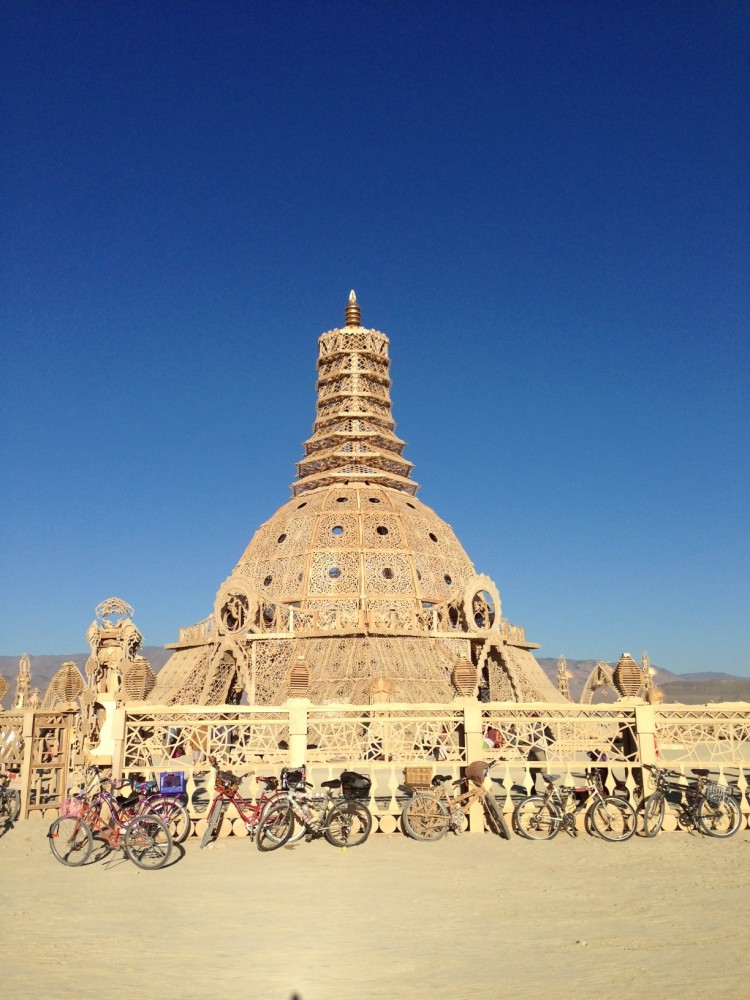 As is the tradition every year, on the final night of Burning Man, the Temple of Grace was set on fire. 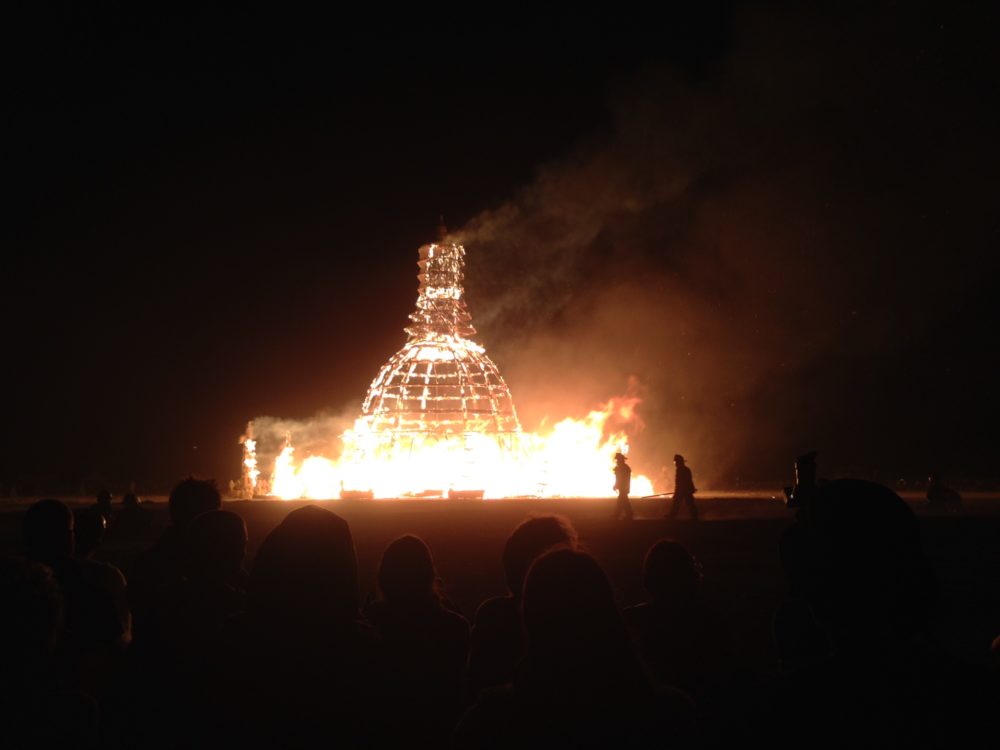 2 thoughts on “My Adventure at Burning Man”